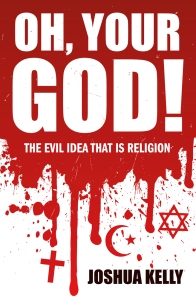 Recently, I became acquainted with a fellow Dangerous Little Books author by the name of Joshua Kelly: A sophisticated, well-mannered, and intelligent person – characteristics that are identifiable in his recent book, “Oh Your God! The Evil Idea That is Religion.”

In this book, Kelly delivers a punch to the institutionalization of religious thought throughout the world. From past to present, he narrates the horrors and “ungodly” actions inflicted by those of religious faith – a faith responsible for unspeakable immorality, might I add.

In my case, the book brought me back to my earliest days of atheism as I made my way through Christopher Hitchens’ “God Is Not Great.” My first introduction into atheism was not by the pen of Dawkins, but through the plainly stated manner Hitchens’ portrayed in his book. I was certainly an anti-theist before I was a convinced atheist. I’ve always known religious faith to be nothing but a folly, but early on I never considered the negativity it spread throughout the world. I was captivated once again, and Kelly is to blame for that.

The God hypothesis is perhaps the most debated subject since the days of early philosophy, but it’s been without resolution. On the other hand, the importance of religion can be argued and demonstrated. Kelly offers a comprehensive case against the impression that religion is ultimately good and needed. I was quite impressed with the amount of research displayed throughout the work, because if one wishes to make a convincing argument for or against an idea, that idea must be countered with a hefty supply of data – and Kelly does just that. By the end of the book, it becomes practically impossible to make a formidable case for religion. If seeking a modern resource to pad your arsenal against the faithfully devoted, “Oh, Your God” is a must-need for any anti-theist.

I’m truly honored to call Joshua Kelly my colleague, ally, and friend.  I will make a claim, not one of faith but of empirical observation: Joshua Kelly will become a common voice among those leading the fight for atheism and secularism throughout the world.

Below I will supply an excerpt from a chapter that I enjoyed greatly, which discusses the apocalyptic hopes of those so “righteously” convinced.

“It only takes a bit of observation to see that a weighty part of theists today are infatuated with the end of the world. The drama, the epic theme, the involvement of such an episode occurring within the span of our lives mesmerizes us. It is the same thrilling motive that attracts us to stories like The War of the Worlds, The Day After Tomorrow, and even the zombie “apocalypse”.

In a survey conducted by the Pew Forum on Religion and Public Life, 79% of U.S. Christians questioned believed in the Second Coming of Jesus Christ, and 20% of those believed that the event would occur in their lifetime. Obviously, it would beg the question: why do you think it’s going to happen in your lifetime? And no compelling evidence exists. We can safely infer from this observation it is because they want it to. Keep in mind that the Second Coming is preceded by the war and torment that will occur (prophetically speaking) by the defeat of the Muslims by the Jews in order to take over the Dome on the Rock and rebuild their great Temple there, only to give the Christ something to destroy in his fury when he returns. Naturally, there are moderate dissenters who take a more pacifist theory, claiming that the new Temple can exist simultaneously with the scintillating mosque—but as we have observed, there is little point in taking or arguing a pacifist view if the fanatical one bears more influence. As well, biblical prophecy heralds the encore of Jesus by global warfare and harsh travesty, including the Rapture—wishing for this event to occur is literally equivalent to praying for widespread destruction and suffering. All this, of course, under the blatant egotistical notion that Jesus will be there for you, that the great creator of the universe has come to see you safely in his arms to heaven before making his world-based war on Satan. How important you must be, to receive such special escort. Muslims believe such a messianic victory can be overturned by the firm capture of the city of Jerusalem to make way for the arrival of the Mahdi, the Twelfth Imam, who will lead them on a glorious crusade to conquer the world for Islam. This fantastical affair even invades Islamic politics with no sensitivity, as the President of Iran said with no hint of facetiousness in his voice: “Our revolution’s main mission is to pave the way for the reappearance of the Twelfth Imam, the Mahdi.” With the tension in the Middle East heating up in noticeable increments almost by the day, Christians engage all their support for a victory for the Jewish people, which they think will signal their own eventual conquest.

The Second Coming of Christ is prophetically partnered with the Rapture: the instantaneous liberation of all good souls from their bodies and their spiritual sojourn up to the Pearly Gates. This removes pure souls from the world in order to protect them from the hellish scene to come. Then follows the Tribulation, a seven-year period in which all unbelieving and unclean souls (e.g., myself and other atheists, homosexuals, pagans, infidels, apostates—the ones who survived punishment on earth—those not baptized into the faith and those who had never been exposed to it, etc., etc.) will remain on the face of the barren planet and suffer the punishment that god drizzles down on us. (One who is familiar with the vomitous Left Behind series will recognize the setting.) This also signals the rise of the Anti-Christ and the building of the Third Temple. Then comes a long-winded list of imaginatively epic events (complete with several more Judgments of various titles) ending ultimately in a final war between Satan and Jesus, which will ravage the world anew and all us sordid soulless left here since the Rapture will be caught in the entropy. Jesus, of course, will defeat Satan, and set up a 1,000-year reign creating a new heaven on Earth. This is evidently an oversimplification and there are variations depending on which brand of lunacy one ascribes to, but I couldn’t bear to give such morbid fantasy-fiction disguised as Christian eschatology any more ink than that.

People literally hope for this to happen—within the year.

With this coming conflict in mind, many American church groups tour to Jerusalem to see the Dome of the Rock and mark it in their hearts as the point of return for Jesus, and make great “charitable” contributions to Christian groups supporting Zionism and the nation of Israel, such as The International Christian Embassy Jerusalem. A grand portion of the funds which it raises goes to strengthen Jewish settlements in West Bank, even though Israel’s occupation there is in direction violation with international law, including Article 49 of the Fourth Geneva Convention, Article 1 of the United Nations Charter, and the International Covenant on Civil and Political Rights. The International Fellowship of Christians and Jews alone has raised over $100,000,000 for the Zionist resurgence. In April, 2002, forty million emails from evangelical Christians in the U.S. sent directly to George W. Bush made very obvious changes in his policy in dealing with Israel.189 This movement, known as Christian Zionism (notably headed at one point by Jerry Falwell and Pat Robertson), rally under the general proclivity of the Christian Right. Falwell is even alleged to have said in 1981, “To stand against Israel is to stand against God. We believe that history and scripture prove God deals with nations in relation to how they deal with Israel.” How, then, can a good Christian object to the violent prescription of the coming End of Days but remain a fervid follower of god? Only subjectively—much like the morality of all religion, it varies by the follower. Zionism is ultimately a new state of ethnic cleansing perpetrated by the Jews to rid the nation of Palestine of all Arabs and Islamic influence and set up an exclusively Jewish state—a rather despicable “eye for an eye” cause considering the intimate history Judaism has with such events, with their slavery by the Egyptians, their Exodus, their ghettos in Venice during the Renaissance and their ultimate nightmare of the Holocaust— mirroring similar influences in Palestine only propagates the same atrocities inflicted upon them in varying scales. But, as is true with all religious conflict, god gives the green light. Israel was god’s gift to the Jews in return for self-lacerating their genitals—ergo, the division of a country by riots and radical warfare is completely validated, and the turmoil that occurs all along the Eastern Mediterranean from northern Egypt to Lebanon is merely a means to an end—the fulfillment of god’s promise to Abraham.

Ultimately, the theology of the Rapture and the Second Coming is much debated, but an overwhelming amount of Christians believe in the literal letter of its happening, the events of which are predicted based on a couple of very loose interpretations of a few incendiary Bible verses and some bad mathematics. And it must beg one to divulge the motivations behind the eagerness for such a thing to occur—after all, the numbers ascending to Heaven are select. Those who pray for the Second Coming to manifest soon—indeed, send money to Israeli foundations in order to help make it come about more quickly— must have pre-disposed ideas as to the purity of their souls. They must have an incredible faith in the righteousness with which they composed themselves to know that they will be spared the tortures of the Tribulation. In other words: they have judged themselves. Such ego is contemptuous and incongruous, knowing that the destruction of the world wreaks forth only after you have been given the Jesus-Land Fast Pass and cut the line to the Paradise Ride.

But there is the corollary to consider: if one hopes for Rapture, one is by proxy hoping—ardently praying—for the continuous, unimaginable torture of their fellow man. They are desperate for the destruction of nations, the leveling of the face of the planet, the raining of havoc onto humans related in blood and history, no matter their spiritual or sexual or philosophical backgrounds. It measures a cavalcade of pain beyond what can be aptly described and they dream of it—relish it! Without mincing words: this is sadism. This is psychotic masturbation. Above that, it’s terrorism. To pray for the Rapture is to revel in psychopathy. It and its supporters should be slandered as those who perpetuated the Cambodian Genocide, the Holocaust, the Rape of Nanking, and the carnage of the 1947 Partition of India should be slandered.”

“Oh, Your God! The Evil Idea That is Religion” can be purchased in paperback and Kindle eBook form.