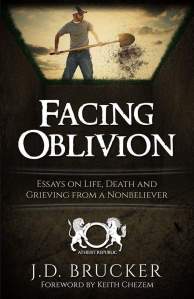 My latest, Facing Oblivion, is available for purchase! You can find the book here in eBook format:

In paperback, you can pick up the book here:

The synopsis reads: “Life is an amazing thing, filled with happiness, optimism, sadness and pain. Theists have said atheists are incapable of experiencing the beauty of life because they do not believe in a god. Furthermore, theists have said the grieving process is ruined because atheists generally do not believe in an afterlife. In his fourth book, Facing Oblivion, J. D. Brucker argues against those claims to show it’s possible to live fruitfully and grieve properly without a belief in a god.”

In the newest episode, Unbuckling the Bible Belt recently featured my work on a new segment highlighting atheist writers and journalists. I suggest you take a listen, follow their blog and podcast, and contribute if you can. Great group of guys taking the fight to the religious where it needs to be: In the southern states of the United States.

Improbable: Issues with the God Hypothesis is now available on Amazon, in both paperback and eBook formats. Like I stated previously, there were a number of reasons why I decided to self-publish rather than seek-out an alternate publishing company. Aside from an opportunity to restructure and re-edit my book, what I truly wanted was to provide my work at a more affordable price. Thanks to everyone for your support.

Synopsis: “Does God exist?” – This question has plagued humanity since its beginning. From the primitive to the sophisticated, human kind has worshipped gods of every shape, gender, size, and creed. One god, however, reigns supreme: The God of Abraham. Giving birth to the three most prevalent monotheistic religions existing today, Yahweh has dominated the theological landscape. A recent intellectual movement has taken place, however, challenging the religious status quo. This movement has given many the right to approach the God hypothesis with skepticism. Improbable: Issues with the God Hypothesis critically examines the claims made by the religious, determining whether a belief in Yahweh is actually as reasonable as long believed.

You can purchase Improbable: Issues with the God Hypothesis at Amazon.